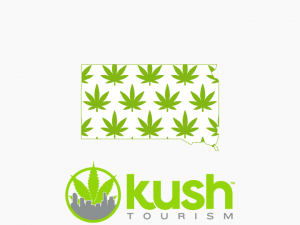 Marijuana has definitely not yet been embraced by conservative South Dakota – not only is medical and recreational marijuana illegal, but the state is one of the harshest against marijuana in the entire country. The CannaLaw Blog even declared it the worst state in the country in terms of treatment of cannabis and those who consume it. Penalties for possession differ depending on the amount – less than two ounces is a misdemeanor, but any larger amount results in felony charges.  Even just possessing drug paraphernalia in South Dakota can land you a misdemeanor charge, up to 30 days in prison, and up to a $500 fine.

However, there was an attempt to get the legalization of medical marijuana on the ballot in 2016. The South Dakota Family Coalition for Compassion exceeded the 13,871 signatures they needed to put the ballot initiative to voters, with 16,631 signatures before the deadline. However, the Secretary of State rejected the attempt. The South Dakota Family Coalition for Compassion is suing the Secretary of State for automatically disqualifying the initiative without proving the signatures were invalid and for failing to inform those who submitted the petition that it was rejected. Time will tell whether South Dakota will be voting on the legalization of medical marijuana in 2018.

In the meantime, marijuana for medical and recreational purposes is still very much illegal in South Dakota and there are no legal outlets to purchase marijuana from. Kush encourages discretion for all travelers. If you do partake, don’t drive while high – you can be convicted of a DUI for driving under the influence of marijuana in South Dakota. If you find yourself in a pinch with the law, check out our South Dakota Cannabis Lawyers page for help!

Is Marijuana legal in South Dakota?

Marijuana, for both medical and recreational uses, is not legal in South Dakota.

There are currently no legal outlets in South Dakota where residents can purchase marijuana or marijuana products.

How can I help legalize marijuana in South Dakota?

The price of marijuana will vary based on strain and quality, and it will also be dependent on what the tax rate is. You can expect prices to be between $10 to $30 per gram.

This is all dependent on the specific law that ends up being passed in South Dakota, but in general, this is an overview of what stores in states with legalized marijuana carry. There will be many different flowers categorized by their strains ranging from strong Indicas to strong Sativas and everything in between. Each strain can have different effects so be sure to ask the budtender for assistance in choosing the best marijuana for you. Strong Sativas strains are known for their general uplifting, energizing, and head high effects while Indicas are known for their full body highs and sedative effects.

Be very careful in South Dakota – marijuana is still criminalized with harsh penalties for possession. Penalties for possession differ depending on the amount – less than two ounces is a misdemeanor punishable by up to a year in jail and up to a $2000 fine, and any larger amount results in felony charges. Even just possessing drug paraphernalia in South Dakota can land you a misdemeanor charge, up to 30 days in prison, and up to a $500 fine. Possession of any amount of hash or concentrates is considered a felony punishable by up to 5 years in prison and a fine of up to $10,000. If you find yourself in a pinch with the law, check out our South Dakota Cannabis Lawyers page for help!

Yes. You can always get in trouble at the federal level, even if marijuana gets legalized in South Dakota. Be sure to always follow the laws of the state you are in.