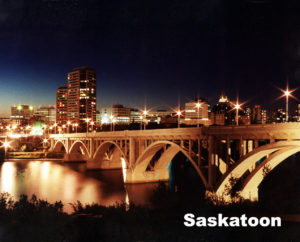 With a population of about 260,600, the city of Saskatoon is the largest city in the Canadian province of Saskatchewan. The city’s metropolitan area has a population of about 305,000, making it the 17th largest area in Canada. The city was officially incorporated in 1906, but settlement began around 1883. The city sits along the South Saskatchewan River, which helped the city prosper initially through trading routes and accessibility. The city was named off of a berry that is only grown in the region, and is featured in many local dishes and desserts.

The city has earned itself the nickname of “Bridge City” because of the plethora of river crossings that help access the area. There 8 bridges to be exact, and these are spread out to best reach different parts of the city. With so many ways in and out of town, this has really helped curb automotive traffic, and makes commuting rather delightful.

The city began as a society of temperance, and was a dry community. The citizens who formed the town wanted to get away from the evil doings of those involved in the liquor trade in Toronto. This didn’t last forever though, thankfully the city has diverted from their puritan path, and now even have booze in town! Thank goodness.

Today the city has a highly diverse economy, which is helpful to maintain financial stability, and also guarantees that if one of their industries tanks, that they will still have enough work to go around in other sectors. The area has long since been known for being highly productive from an agricultural standpoint. Wheat is the largest crop in the area, and it is grown in huge proportions. Other major industries of the area are oil and natural gas mining, and also the production of potassium rich salt – otherwise known as potash.

Unfortunately, there are no retail medical marijuana shops in Canada, instead they utilize a system where meds are distributed through the mail or by personal delivery. That being said, we haven’t yet started a Saskatoon dispensary map & directory, but when recreational shops do start opening, we will definitely create one, so keep your eyes peeled for more once the legalization does occur.

Come check out Saskatoon as soon as you possibly can! It is an easy place to lose yourself in, because it is such a cool and beautiful city. If you would like more information on Saskatchewan Marijuana Laws, click here!