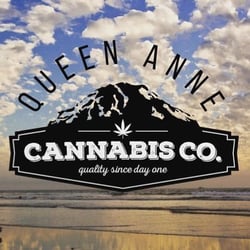 About two blocks away from The Key Arena and walking distance from the cruise ship port, Queen Anne Cannabis is one of the youngest recreational stores in the Seattle area, with a grand opening of April 20, 2016. In addition to being so new they are also one of the only stores in the downtown/ Queen Anne area and with such a low concentration their popularity is quickly rising.

“The majority of our business currently is from tourists visiting on cruise ships, many of them on the Alaskan Cruises,” store manager Riley says “we are seeing a lot of the local traffic pick up and that will be nice once the summer is over, but with our location it is a no-brainer for the tourists to come to us.”

Riley has been in the business for a long time, he was previously the manager at the PDA medical dispensary in Belltown, before the medical program folded into 502. A seasoned veteran full of passion for what is possible in this industry, Riley is hoping for a medical program reform:

“With 502 passing and the 37% tax on cannabis, it really hurt a lot of patients in their pocket. While we do offer a 10% discount to anyone that brings in their medical card, it is just not enough.” says Riley “I started in the medical cannabis program and it is very important to me personally to be able to provide the necessary care for these people.”

When it comes to the tourists, many of them have zero idea about what is or what is not legal but they do know what they want to buy. Some of the biggest sellers are pre-rolled joints, extracts and edibles. The convenience of pre-rolled joints and the discretion of a vape-pen is a big draw for those only spending a day a couple of hours in Seattle.

We highly recommend stopping in Queen Anne Cannabis Company, and making a purchase. It is a great store, in a great location, with great people. Click here for more information

Article Name
Queen Anne Cannabis Company
Description
About two blocks away from The Key Arena and walking distance from the cruise ship port, Queen Anne Cannabis is one of the youngest recreational stores in the Seattle area, with a grand opening of April 20, 2016.
Author
David Hayes
Kush Tourism