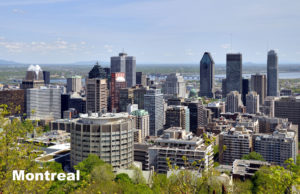 With a population of around 1,649,519 citizens, the city of Montreal is the largest city in Quebec, and the second largest city in all of Canada. The greater metropolitan area holds about 3,407,963, which is huge. The city was officially incorporated in 1832, but settlement began in 1642. The city is located on an island of the same name in southwest Quebec, and there are smaller subsequent islands around as well. The city is mostly French speaking, so if you don’t want to look like a typical American tourist, maybe consider brushing up on your French before coming to town.

Montreal has an extremely stable economy due to their many successful industries that have had long-standing histories with the city. The area has long been known for their production of goods, entertainment scene, and beautiful landscapes. The two major rivers that run through the city, the Saint Lawrence and Ottawa Rivers, meet right in the middle of the city. Also, Mount Royal is located in town and the mountainous wooded area is one of the largest areas of recreation and preserved land in all of Quebec.

The city also has a long history of producing jazz and rock and roll musicians. There has always been a huge emphasis placed on the arts and creativity in the city, and with their proximity to the United States border, American culture has long since bled over into Montreal. That being said, the city boasts being both multicultural and cosmopolitan. There are many places around the city to take in art, theater, music, and more!

There are no retail medical marijuana shops in Canada, instead they utilize a system where meds are distributed through the mail or by personal delivery. That being said, we haven’t yet started a Montreal dispensary map & directory, but when recreational shops do start opening, we will definitely create one, so keep your eyes peeled for more once the legalization does occur.

Come check out Montreal as soon as you possibly can! It is an easy place to lose yourself in, because it is such a cool and beautiful city. If you would like more information on Quebec Marijuana Laws, click here!