Marijuana Near the Mob Museum 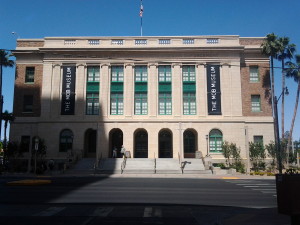 Officially opened in 2012, The Mob Museum is exactly as it names describes; a museum dedicated to organized crime and the fight to eradicate it. The museum features stories, exhibits and artifacts spanning the entire history of organized crime in the United States with plenty of shock and awe while also providing world-class education. It is a self-guided tour and only two blocks away from Fremont Street in downtown Las Vegas. For more information on the museum and its exhibits, click here.

Consuming cannabis in or anywhere on the property is illegal and banned. Initiative Petition 1 was passed on the eighth of November, so going to a recreational shop and getting a vape pen and going outside won’t be anything worth getting “rubbed Out” over! Public consumption is also still banned in Nevada, we recommend consuming in private before your visit. For a full directory of medical cannabis shops in Nevada, click here.

Located in the Fremont Hotel & Casino, The Buffet is open for breakfast, lunch and dinner 5 days a week while the cafe is open seven days a week. Combining american and tropical flavors and cuisine, there is even breakfast available all day.

If you are looking for something much more sophisticated, the Triple George Grill is for you. With craft cocktails and deliciously prepared cuisine, it is a fantastic spot to enjoy a nice meal and enjoy each others company.

Voted as one of the best pizzas in Las Vegas, Pizza Rock takes no shortcuts in preparing fresh pizzas and other Italian wood fired favorites.