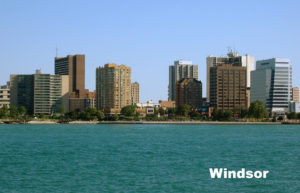 With a population of about 210,891, the city of Windsor sits just across the river from Detroit, Michigan. The city was officially incorporated 1854, although settlement occurred much earlier in 1749. The city was historically another major producer of automobiles for Canada, and with their proximity to Detroit, it is clear to see why. This area has a rich history of the industrial production of cars and other forms of transportation. Before taking on the task of being one of Canada’s largest auto producers, the area focused much of their efforts on agricultural production. The soil in the city and near the Detroit River is extremely fertile, and the town thrived on producing and trading food items that were unique to the area.

The city sees 4 distinct seasons of weather, which is unusual for much of Canada, which typically sees longer winters and less drastic variation in temperature. Windsor is one of the few cities in Canada known for having less mild summers, and the temperature actually rises to the point of being called “hot.”

The city’s main sources of income come from the production of goods, tourism, government facilities, and their education system. With such a broad range of opportunities to find work, the city features a highly diverse population with folks from all walks of life making up their workforce. It’s nice when a city doesn’t pigeonhole their labor force, and instead offers a cornucopia of different jobs to have the most highly functional labor market.

There are also many schools in the city that help contribute to a more highly educated society, and this has done wonders for Windsor. The St. Clair College, the University of Windsor, and even the University of Western Ontario have facilities in town, and this brings a youthful and vibrant group of students to town every year.

Unfortunately, there are no retail medical marijuana shops in Canada, instead they utilize a system where meds are distributed through the mail or by personal delivery. That being said, we haven’t yet started a Windsor dispensary map & directory, but when recreational shops do start opening, we will definitely create one, so keep your eyes peeled for more once the legalization does occur.

Come check out Windsor as soon as you possibly can! It is an easy place to lose yourself in, because it is such a cool and beautiful city. If you would like more information on Ontario Marijuana Laws, click here!