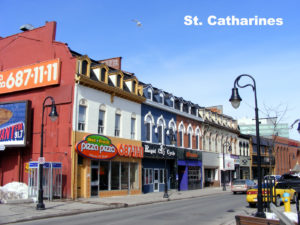 With a population of about 131,400, the city of St. Catharines is the largest city in the Niagara Region of Canada. The city was officially incorporated in 1876, but settlement occurred significantly earlier in 1783. The city sits across Lake Ontario from Toronto, which is about 32 miles north of St. Catharines.

The city has lush green landscapes all over, offering over 1,000 acres of trails, gardens, parks, and other natural areas that are wonderful for exploration of a new area. The city is also located along the Niagara River, and the accompanying river trails are incredible for day hikes.

The city is home to General Motors of Canada, and at one time was the largest employer in the city. Many automobiles were produced here, though production values have waned in recent years, and now more companies are switching from production of parts, to handling service aspects of the industry instead.

The city is home to Brock University, and several other institutions of higher education. Many Canadian schools have satellite campuses in the area.

There are no retail medical marijuana shops in Canada, instead they utilize a system where meds are distributed through the mail or by personal delivery. That being said, we haven’t yet started a St. Catharines dispensary map & directory, but when recreational shops do start opening, we will definitely create one, so keep your eyes peeled for more once the legalization does occur.

Come check out St. Catharines as soon as you possibly can! It is an easy place to lose yourself in, because it is such a cool and beautiful city. If you would like more information on Ontario Marijuana Laws, click here!