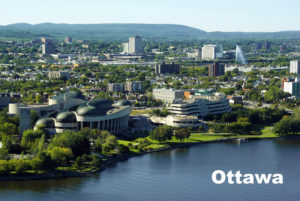 Ottawa is the Capital city of Canada, and with a population of about 960,754, it is the 4th largest city in all of Canada. The city sits just south of the Ottawa River, and was officially incorporated in 1855, though its founding took place in 1826.

Ottawa began with humble origins, primarily focusing on industrial production. The city saw a huge influx of sawmills around the time of the Industrial Revolution, and this brought a great amount of business to town. The establishment of the railroad system through town that also went to Quebec occurred in 1854, and this also had a huge hand in growing the population and economy of the city.

Today the city is known for offering a superb quality of life. Residents are the most highly educated in all of Canada, and crime rates are ridiculously low. Also, the average cost of living is lower than most of Canada’s other major cities, so you won’t have to pay an arm and a leg for housing and other essentials.

Ottawa is also known for having a huge market for culture and entertainment. There are several sections of the city that have attracted many small boutique shops, art galleries, museums and more. Having this system where there are parcels of the city that are jam packed with arts and theaters makes for a really cool experience when you find yourself in one of these areas. Byward Market is the larger of the entertainment districts, and there is always something going on that is sure to pique your interest!

There are no retail medical marijuana shops in Canada, instead they utilize a system where meds are distributed through the mail or by personal delivery. That being said, we haven’t yet started a Ottawa dispensary map & directory, but when recreational shops do start opening, we will definitely create one, so keep your eyes peeled for more once the legalization does occur.

Come check out Ottawa as soon as you possibly can! It is an easy place to lose yourself in, because it is such a cool and beautiful city. If you would like more information on Ontario Marijuana Laws, click here!