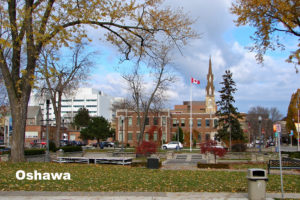 Sitting on the Lake Ontario shoreline in southern Ontario, the city of Oshawa has a population of about 149,607, and their metropolitan area makes it the 15th largest in all of Canada. The city was officially incorporated in 1850, but settlement began significantly earlier in 1760 when French traders established a fur trading post in town. This location was ideal for fur traders, not only because of its ease of accessibility, but also for the large population of beavers and other animals with valuable pelts.

While the fur trading helped get Oshawa’s feet off the ground, it didn’t remain the city’s major form of income. The city really owes its success to the automobile industry. The city is the home of the General Motors Canada Headquarters, and was a huge producer of not only cars themselves, but also additional parts that were then shipped all over the world. This not only gave the city financial security and many jobs to offer the people of the city, but it also earned the city the distinction “Canada’s Motor City.” This affable nickname stuck with the city as they were proud of all the hard work they were doing to increase Canadian mobility.

The city also offers much in the way of cultural events and facilities. The Canadian Automotive Museum is fittingly located in town, and shows all that the workers at the many automobile factories went through in their trials and tribulations of building some of Canada’s first cars. There is also the Robert McLaughlin Gallery which offers much in the way of art across a broad spectrum of different mediums. There are also many other theaters, concert halls, and other areas for live performance in the city. Oshawa takes its entertainment seriously, and strives to offer a wide variety of different live events to entertain its citizens and visiting travelers.

Another cool aspect of Oshawa is that in the downtown centre, there is a place that will go the extra mile to help entrepreneurs and small business learn all the skills that go into forming a successful company and more. The Regional Innovation Centre prides itself in giving the most up-to-date lessons for those who crave to do more than slave away at a 9-5 desk job. This source of financial and business advice is super cool, and we think it is awesome that these services exist to help the people succeed in achieving greater autonomy.

Unfortunately, there are no retail medical marijuana shops in Canada, instead they utilize a system where meds are distributed through the mail or by personal delivery. That being said, we haven’t yet started a Oshawa dispensary map & directory, but when recreational shops do start opening, we will definitely create one, so keep your eyes peeled for more once the legalization does occur.

Come check out Oshawa as soon as you possibly can! It is an easy place to lose yourself in, because it is such a cool and beautiful city. If you would like more information on Ontario Marijuana Laws, click here!