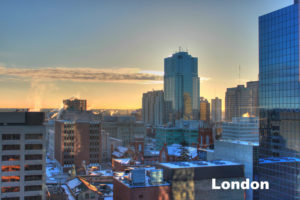 London and the surrounding areas were physically created by glaciers, and due to that, the soil is highly fertile and perfect for agricultural production. Most of the areas around the city are filled with marshy landscapes. The Thames River also runs through town and was dammed to create the Fanshawe Lake in the northeast part of the city.

The city is pretty fast paced, but also features many wooded areas. Seeing so many trees in a downtown metropolitan area is a little shocking at first, but it definitely is a cool sight to behold. This city feature has given the area the nickname “The Forest City.”

The city hosts many outdoor events and festivals which help contribute to the tourism industry that thrives in the town. That being said, the major employers and industries in the city are institutions of higher education and healthcare. There are many schools in the city as well as many hospitals, and this contributes to an intellectually savvy community. There are also a handful of tech companies headquartered in London, who work to keep the city on the cutting edge of technology.

There are no retail medical marijuana shops in Canada, instead they utilize a system where meds are distributed through the mail or by personal delivery. That being said, we haven’t yet started a London dispensary map & directory, but when recreational shops do start opening, we will definitely create one, so keep your eyes peeled for more once the legalization does occur.

Come check out London as soon as you possibly can! It is an easy place to lose yourself in, because it is such a cool and beautiful city. If you would like more information on Ontario Marijuana Laws, click here!