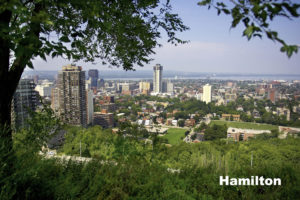 The city of Hamilton, Ontario has a population of about 519,949, and was officially incorporated in 1846. The city has the third largest population in Ontario, and the 9th largest in all of Canada. The city made a name for itself as being a port city, and with its convenient location on the west side of Lake Ontario, it wasn’t difficult for them to set up a trade system and route that helped them grow rapidly with great prosperity.

Today the city has an incredible art scene, and many other culturally diverse offerings. There is always something beautiful to see in the city, and their many galleries, museums, theaters and concert halls remind the public of this fact often. The city is also home to the Royal Botanical Gardens, which in the right time of year, can offer some of the most incredible sights and smells in the region. The flowers and other plants that grow here are designed with all of the senses in mind, and is a great place to relax and unwind in nature.

For sports fans, Hamilton is loved for having a Canadian Football team, the Hamilton Tiger-Cats, who play at Tim Hortons Field. There is also the Canadian Football Hall of Fame located in the heart of the city. This place is like a mecca to Canadian Football fans, and many come to learn more about the history of the sport and all of its greats.

The city is located in Southern Ontario and is actually on the end of the Niagara Peninsula. Most of the city is located on the water, which not only helped the city thrive in importing and exporting goods, but it also provides the city’s citizens with tons of opportunity to get out on the water for recreational purposes. Nearly every car in town has a roof rack that gets a fair amount of use. Canoeing, kayaking, and standup-paddleboarding are like a religion here in the warmer months. Though, if boating isn’t your thing, the swimming and fishing in the area are equally as great.

There are no retail medical marijuana shops in Canada, instead they utilize a system where meds are distributed through the mail or by personal delivery. That being said, we haven’t yet started a Hamilton dispensary map & directory, but when recreational shops do start opening, we will definitely create one, so keep your eyes peeled for more once the legalization does occur.

Come check out Hamilton as soon as you possibly can! It is an easy place to lose yourself in, because it is such a cool and beautiful city. If you would like more information on Ontario Marijuana Laws, click here!