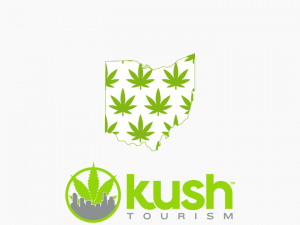 Surprisingly, Ohio is one of the few states in the Midwest region that is seeing a strong push towards marijuana legalization. However, on November 3rd, 2015, voters rejected a proposal to legalize recreational and medical marijuana. The proposal included a stipulation that gave exclusive growing rights to private investors and limited the number of marijuana grow sites to 10, which turned off many potential supporters.

House Bill 523, effective on September 8, 2016, legalized medical marijuana in Ohio. This was a huge step forward for the state that no one expected to show tolerance.

Kush encourages discretion for all travelers. If you do partake, don’t drive while high – you can be convicted of a DUI for driving under the influence of marijuana in Ohio. If you find yourself in a pinch with the law, check out our Ohio Cannabis Lawyers page for help!

Is Marijuana legal in Ohio?

Yes and no, House Bill 523, effective on September 8, 2016, legalized medical marijuana in Ohio, but recreational cannabis is still considered highly illegal in Ohio

There are a handful of state-licensed dispensaries around the state. These are the only legal outlets if you are a qualifying Ohio state medical marijuana patient.

How can I help legalize marijuana in Ohio?

When will dispensaries open up?

Medical marijuana was legalized in November 2016, and dispensaries began opening in the middle of 2017.

This is all dependent on the specific law that is passed in Ohio, but in general, this is an overview of what stores will carry. You will see a number of different flower strains categorized by their strains ranging from strong Indicas to strong Sativas and everything in between. Each strain can have different effects so be sure to ask the budtender for assistance in choosing the best marijuana for you. Strong Sativas strains are known for their general uplifting, energizing, and head high effects while Indicas are known for their full body highs and sedative effects.

Marijuana has been decriminalized in Ohio. Possession of up to 100 grams, growing up to 100 grams, and giving up to 20 grams of marijuana to another person are all considered to be minor misdemeanors punishable by a maximum of $150 fine. If caught, your driver license could also be suspended for up to 5 years. If you find yourself in a pinch with the law, check out our Ohio Cannabis Lawyers page for help!

Yes. You can always get in trouble at the federal level, even if marijuana is legalized in Ohio. Be sure to always follow the laws of the state you are in, and state authorities will have no issues with you.

Read more about BHO and Concentrates here: “What’s the Buzz about BHO”
Nothing on this website should be considered legal advice or as a substitute for legal advice. Please respect the current state of Marijuana law in your area.