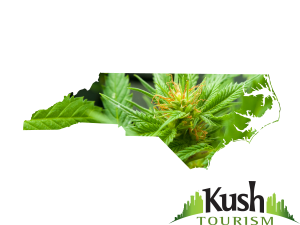 In North Carolina, both medical and recreational cannabis are illegal. However, marijuana has been decriminalized, so first time offenders will not be jailed for possession of small amounts of marijuana. Possession of up to 0.5 ounces is considered a misdemeanor punishable by a maximum fine of $200.

Though many previous rounds of medical marijuana legislation have failed, many are hopeful about House Bill 983 passing. The bill is focused on legalizing marijuana for medical purposes, and if passed, would allow a number of certified physicians to prescribe medical marijuana for patients who have been diagnosed with a terminal or chronic illness. The Bill needs to pass in the House Health Committee before moving on to be passed in the House. If passed, recreational marijuana use will still be illegal in the state.

Kush encourages discretion for all travelers. If you do partake, don’t drive while high – you can be convicted of a DUI for driving under the influence of marijuana in North Carolina. If you find yourself in a pinch with the law, check out our North Carolina Cannabis Lawyers page for help!

Is Marijuana legal in North Carolina?

Currently, marijuana, for both medical and recreational uses, is not legal in North Carolina. House Bill 983, which would legalize marijuana for medical purposes, is currently in the House, awaiting review.

There are currently no legal outlets in North Carolina where residents can purchase marijuana or marijuana products. If you are a patient with epilepsy who qualifies under the North Carolina Epilepsy Alternative Treatment Act, you must obtain the hemp extracts from a medical marijuana state that permits out-of-state patients.

How can I help legalize marijuana in North Carolina?

Residents of North Carolina can help get marijuana legalized in their state by writing to their state legislators and urging them to legalize marijuana.

What will be legalized if House Bill 983 passes?

North Carolina’s House Bill 983 is aimed at legalizing marijuana for medical purposes. It would allow patients to possess and use marijuana. Patients must be diagnosed with a terminal or chronic illness, and they must receive a prescription from a physician who has determined that marijuana alleviates illness or symptoms of the illness. The marijuana will only be for the patient’s personal use. Recreational marijuana will still be illegal in the state.

The price of marijuana will vary based on strain and quality, and it will also be dependent on what the tax rate is. You can expect prices to be between $10 to $30 per gram. If Bill 983 is passed, marijuana will be taxed $8 per ounce.

This is all dependent on the specific law that ends up being passed in North Carolina, but in general, this is an overview of what stores in states with legalized marijuana carry. You will see a number of different flower strains categorized by their strains ranging from strong Indicas to strong Sativas and everything in between. Each strain can have different effects so be sure to ask the budtender for assistance in choosing the best marijuana for you. Strong Sativas strains are known for their general uplifting, energizing, and head high effects while Indicas are known for their full body highs and sedative effects.

Marijuana has been decriminalized in North Carolina. Possession of up to half an ounce of marijuana is considered a misdemeanor punishable by a maximum fine of $200. Possession of 1/2 ounce to 1½ ounces can earn up to 45 days in prison and/or a fine of up to $1,000. If you find yourself in a pinch with the law, check out our North Carolina Cannabis Lawyers page for help!

Yes. You can always get in trouble at the federal level, even if marijuana gets legalized in North Carolina. Be sure to always follow the laws of the state you are in, and state authorities will have no issues with you.

Join us for a world famous Kush Tour during your visit to Seattle! You will see a cannabis grow operation, and so much more!
(More Information)