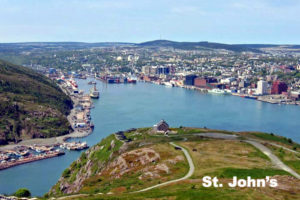 With a population of about 214,000, the city of St. John’s is both the capital and the largest city in the Canadian province of Newfoundland & Labrador. The city was officially incorporated in 1888, but settlement began significantly sooner in 1497. The city began as a fishing and trading village, and grew alongside their now bustling tourism industry. The city is one of the highest traveled to coastal cities in the world, and it is clear to see why!

The city is the furthest point east in all of North America, and has stunning views of the Atlantic on nearly all sides. Located on the eastern tip of the Avalon Peninsula on Newfoundland Island. As a result of this, activities like sailing and fishing have a prominent place in the town. Aquatic activities are a must in the warm months. Not only is it great exercise, but also a ton of fun and a great way to meet people and make new friends!

The city also has found other ways to attract tourists. Besides the seafood being insanely delicious, and tons of restaurants serving it up on a nightly basis, there’s also entire districts and streets lined with little shops filled with trinkets and goods. Both Water Street, and Duckworth Street has many of these little shops and also many diverse restaurants and cafes. These parts of town are always a blast to see what sorts of odds and ends you come across. From locally produced goods, to rare treasures, St. John’s has it all.

Unfortunately, there are no retail medical marijuana shops in Canada, instead they utilize a system where meds are distributed through the mail or by personal delivery. That being said, we haven’t yet started a St. John’s dispensary map & directory, but when recreational shops do start opening, we will definitely create one, so keep your eyes peeled for more once the legalization does occur.

Come check out St. John’s as soon as you possibly can! It is an easy place to lose yourself in, because it is such a cool and beautiful city. If you would like more information on Newfoundland & Labrador Marijuana Laws, click here!