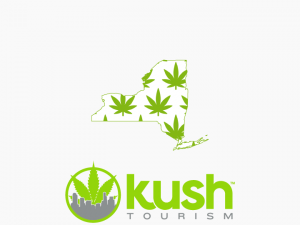 Although marijuana has been decriminalized in New York for decades, New York only very recently legalized medical marijuana – the first medical dispensary opened in beginning of January 2016. However, New York’s medical marijuana laws look very different from many other states’ and put much stricter restrictions on patients’ access to marijuana. The 25 (or so) state licensed dispensaries are forbidden from selling smokeable marijuana, leaving flowers off of store shelves. Patients’ choices are limited to oils and tinctures, which can be vaporized, inhaled, or taken orally in capsules. Patients can also access topicals, transdermal patches, and some forms of edibles like chewable and effervescent tablets and lozenges.

However, despite the slow and restrictive takeoff of New York’s medical marijuana program, there has been a push for recreational marijuana legalization in the legislature lately. Hopefully one of these bills gets passed in the near future! Who wouldn’t want to turn the Big Apple into an apple pipe like back in the old days?!

The best advice we can give for tourists looking to partake in the cannabis culture is discretion. It’s best to keep your marijuana use out of public areas, but if you must smoke out in the open, a discreet vape pen is your best option. If you find yourself in a pinch with the law, check out our New York Cannabis Lawyers page for help!

Is Marijuana legal in New York?

Yes, medical marijuana is legal in New York, however recreation marijuana use is still illegal. If you find yourself in a pinch with the law, check out our New York Cannabis Lawyers page for help!

Can I get my Medical Card if I am not a New York resident?

No, you cannot get your medical marijuana card if you are not a New York resident.

Where can I buy marijuana in New York?

As of January 2016, you will need a medical card, which you can get from specific registered doctors in the state.

New York is unique in the types of marijuana they are allowing medical dispensaries to sell – unlike most other states, New York is not allowing the sale of smokeable marijuana. This means that patients will not be able to purchase any flowers at these shops. Choices are limited to tinctures and oils, which can be inhaled, vaporized, or consumed orally in capsules. Patients can also access topicals, transdermal patches, and some forms of edibles like chewable and effervescent tablets and lozenges.

If the Marijuana Regulation and Taxation Act is passed, we can expect retail stores to open up and sell a range of marijuana-based products. This includes, but is not limited to, marijuana flowers in a variety of sativa and indica strains, concentrates, oils, edibles, transdermal products, seeds, and clones.

This is dependent on the marijuana providers, which product you will be purchasing, as well as potency and quality.

Medical marijuana patients are permitted to have a 30-day supply of non-smokeable marijuana. Home cultivation is still illegal.

Legally, you can only consume marijuana while on private property. However, if you must partake in public, a vape pen is your most discreet option.

If you’re considering purchasing or doing a dab, it is also important to know what is in the essential oil being offered or sold and if it is safe. Many extracts may not have been purged correctly, and may contain residual amounts of butane or other solvents. CO2 oil is often noted as the safest oil because critical extraction machines that use CO2  as the only solvent extract it.

Yes. You can always get in trouble at the federal level until marijuana is rescheduled, but as long as you follow the laws for marijuana in New York, local authorities will not have any issues with you.