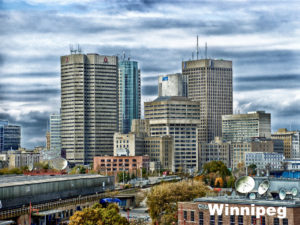 With a population of about 663,617, the city of Winnipeg is the largest city in the province of Manitoba, and is the 7th largest city in all of Canada. The city was founded in 1738, and was later officially incorporated as a city in 1837. The city is located near a lake of the same name, and is known as “The Gateway to the West,” because of their many railways and other transportation centers.

Winnipeg is also well known for the huge amount of festivals and other annual events that the city hosts. The yearly events are mostly focused on music and the arts. There is the Jazz Winnipeg Festival, the Winnipeg Folk Festival, Folklorama, and the Festival du Voyageur. These events are attended by many, and are great ways to get out and see all the city has to offer. We love when large cities put so much emphasis on getting the people together and expanding their cultural horizons.

Winnipeg is also a big sports town, and go figure, they love hockey! The city has an NHL team in town, the Winnipeg Jets, and this brings a good amount of tourism and fans to the town. The city is also home to minor league hockey team, the Manitoba Moose. The city can’t get enough hockey! Also, the city has a Canadian Football team based in town too. The Winnipeg Blue Bombers are part of the Canadian Football League (CFL) and also bring a good amount of tourism to the city.

With Lake Winnipeg located near town, and the confluence of the Assiniboine River and the Red River of the North, there are a lot of water activities that can be engaged in nearby. The city is known as “The Forks,” and kayakers and canoe enthusiasts adore this area for the wide variety of locations they can hit the water on.

There are no retail medical marijuana shops in Canada, instead they utilize a system where meds are distributed through the mail or by personal delivery. That being said, we haven’t yet started a Winnipeg dispensary map & directory, but when recreational shops do start opening, we will definitely create one, so keep your eyes peeled for more once the legalization does occur.

Come check out Winnipeg as soon as you possibly can! It is an easy place to lose yourself in, because it is such a cool and beautiful city. If you would like more information on Manitoba Marijuana Laws, click here!