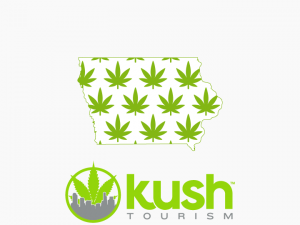 Iowa is another midwestern state with strict marijuana laws, although not as harsh as some southern states. Marijuana is considered a hallucinogenic (Schedule I) substance in Iowa, and even first-time offenders can face up to a $1,000 fine, six months imprisonment, and a misdemeanor for possessing ANY amount of weed (for recreational use). Subsequent offenses result in longer prison sentences and larger fines, especially when the violation involves minors or firearms. Cultivating and possessing marijuana with the intent to distribute in Iowa is considered a Felony and punishable by very hefty fines and longer prison sentences. Of course, the extent of these penalties depend on how many kilograms of marijuana are involved and whether it was being solicited to a minor. If you find yourself in a pinch with the law, check out our Iowa Cannabis Lawyers page for help!

Many Iowa residents are advocating for a comprehensive medical marijuana program, but certain state lawmakers are not budging. In March 2016, patient advocates held a large public rally to extend the current cannabidiol laws, which limit the types of patients who can receive protection from criminalization if caught possessing cannabidiol. So far, only patients with intractable epilepsy (and their caregivers) and exempt from prosecution. Additionally, these patients cannot legally purchase cannabidiol in Iowa, but are forced to obtain it from states where cannabidiol is legally sold. Unfortunately, although several bills have been introduced that would expand the current cannabidiol law, they have yet to secure a hearing.

Even though a Quinnipiac poll taken in April 2015 revealed that 87% of Iowans actually support the legalization of medical marijuana, it seems their voices are going unheard. In 2015, the Iowa Senate voted in favor of a comprehensive medical marijuana proposal, which would have permitted individuals suffering from many health conditions, such as cancer and HIV/AIDS, to safely access and consume medical marijuana. However, the House did not debate the proposal in 2015.

While the legalization of recreational marijuana certainly does not seem likely in Iowa’s near future, there is hope for broader medical marijuana laws in the Hawkeye state. Based on the popular support for the 2015 proposal, it’s only a matter of time before Iowans finally receive viable access to medical cannabis. However, it seems changes are unlikely to occur in 2016, according to Iowa Senate Majority Leader Michael Gronstal. He claims there’s not enough time left in the Iowa Legislature’s 2016 session for the meetings and work that are required. Hopefully the primarily agricultural state realizes how much money could stand to be made from legalizing A PLANT. Here’s to hoping!

Is marijuana legal in Iowa?

The use of recreational marijuana is very much illegal in Iowa and violators are subject to fines, imprisonment, or both. However, possession of limited amounts of cannabidiol oil is legal for patients with intractable epilepsy and their caregivers (for patients under 18), assuming they meet all the conditions of this limited program.

It’s illegal to sell and purchase marijuana for either recreational or medical purposes in Iowa. As for qualified patients needing to purchase cannabidiol oil, there are no state-licensed dispensaries in Iowa.

How can I apply for my Medical Card?

Iowa residents (with valid ID) who have been diagnosed with intractable epilepsy must obtain written documentation by an Iowa-licensed neurologist and request a copy of their medical records in order to apply for a medical cannabidiol card.

The qualified patient or caregiver must submit the application for the medical cannabidiol card to the Iowa Department of Public Health. If approved, the applicants must obtain the registration card through the Iowa Department of Transportation. Click here [http://www.iowadot.gov/mvd/driverslicense/medicalcannabidiolcards.html] for more information.

Can I get my Medical Card if I’m not an Iowa resident?

Where can I go on vacation to enjoy legal weed now?

You are always at risk of getting in trouble at the federal level, but you shouldn’t have any problems in states where marijuana is legal. Of course, each state has certain rules to abide by. If you find yourself in a pinch with the law, check out our Iowa Cannabis Lawyers page for help!

You can make a difference by voting in favor of marijuana legalization anytime it gets on the ballots in Iowa. Contact Iowa legislators, write letters to your local newspaper, and share all the information you learn on social media outlets.