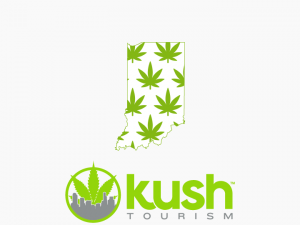 Indiana is one of the states that is lagging behind the cannabis movement. Marijuana, including hash and hash oil, is listed under the Indiana criminal code as a Schedule I drug. As such, there are many fairly harsh penalties for using and/or possessing cannabis, and even your presence at or knowledge of cannabis use can get you a misdemeanor and 6 months in jail. If you find yourself in a pinch with the law, check out our Indiana Cannabis Lawyers page for help!

They are trying however: The Indiana General Assembly concluded its 2016 session without making progress on a single marijuana bill. While many bills were introduced by smart and compassionate lawmakers, such as Sen. Karen Tallian’s comprehensive medical marijuana bill, SB 209, not a single one advanced beyond committee. Hopefully we can see some sort of traction towards progress in the near future, here’s to hoping!

Marijuana is NOT legal in Indiana – not even medical, and we would caution you to be extremely careful if you do medicate, and definitely do not drive – they’re not kidding!

Is Marijuana legal in Indiana?

No. As of July 2016, neither medical nor recreational marijuana are legal in Indiana. If you find yourself in a pinch with the law, check out our Indiana Cannabis Lawyers page for help!

Currently, there are no legal outlets in Indiana where residents can purchase marijuana for recreational purposes. Make no mistake, people ARE buying weed. Unfortunately, their government still believes it has the right to deny its citizens the basic human right of consuming this sacred and medicinal plant. As a result, all of that potential tax money and ability to ensure the product is safer and tested if lost in the illegal market.

We never condone breaking the law, but if you want to see what people report to be spending on weed in Indiana, check out Price of Weed.

How can I learn more about unfair implementation of the current drug laws?

The ACLU has written a report about the racially biased implementation of drug laws in their report, The War on Marijuana in Black and White. If you are not yet aware, please read this. The “War on Drugs” has effectively been a war on people of color, their families and their neighborhoods.

How can I help legalize marijuana in Indiana?

There are 6 different NORML chapters in  the state of Indiana, including one on campus at Purdue University.