The last 4 months have been a complete whirlwind as our company had an amazing experience participating in the Launch Incubator in San Francisco. We did not realize how challenging this fundraising process would become. In fact, the extra effort from our entire team of 14 made it possible for the founders to travel every week and deliver presentations. For anyone considering the Launch Incubator, know that this experience is a serious boot camp placing you in a weekly competition with some of the most innovative startups in the world. Upon starting the program, we felt like we had a lot to prove to the tech industry about our vision and mission. We were honored and humbled to be accepted into the program as Jason’s first cannabis investment.

Like many other people, I found Jason through his podcast, This Week in Startups. I have been listening to his podcast every week for well over a year, and it is a great way to get plugged into Silicon Valley. I use it as a resource to learn about the founders of cutting edge technology companies, and how investors looked at those businesses. It is a great learning opportunity during each morning commute or whenever I have some free time. It is also a great way to learn about Jason, including what he looks for in a company.

About 20% into our last fundraising round, I sent a short yet sweet email to Jason Calacanis. I told him our revenue, and what we had built and were trying to grow. To my surprise, he replied back introducing me to his team as well as inviting me to come down to meet him and interview to be a part of the next Incubator class. I immediately filled out their incubator application and tried to lock down a day to meet in SF. I bought a ticket from Seattle where our HQ is located, and flew down for what I knew was going to be a pretty nerve racking interview. Once I got to SF, I rented a car and headed to the interview location (first mistake). Every trip since then I took the train and Uber, which is not as expensive, and I did not have to worry about parking in San Francisco, which is a pain. 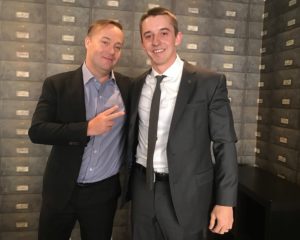 Once I got to the interview, I met with 3 people. The first meeting was with Craig Zingerline. Craig wanted to know our story and then asked to see our product. Craig also made sure we understood the program and how the Incubator worked. This was surprisingly helpful because as much as I had read, I honestly did not know much about how the program worked.The second meeting was with Brian Alvey, Jason’s partner at Weblogs Inc. which they sold to AOL in 2005. I did not know any of that either, so I was already two steps behind. Brian wanted to see the product first and then hear the story. He also let me know that Jason likes to see the product first and then talk about the business. With both Brian and Craig, I felt like I ended up asking just as many questions as they did. This was helpful preparation for my next interview with Jason.

Once I sat down with Jason, I moved straight into our product, Kush Marketplace, a wholesale B2B cannabis marketplace. After a quick walk-through showing the basic features and traction, Jason started to ask questions about why we were here, what our background was, and what makes us special. Anyone who listens to Jason’s podcast knows that Jason is a poker player, and that he invests in the founders. So I knew these were the most important questions. I have learned that Jason appreciates direct candid conversation. He quickly cuts through the bullshit and does not like to be oversold.

After I returned to Seattle, I was surprised to see an email from Jason’s Chief of Staff, Ashley, letting us know that we had been accepted into the program. After a legal review of their terms, we decided it was a great opportunity for us and our business. My business partner, Mike and I flew down from Seattle a couple weeks later for the first session where we met seven other company founders in the program. Once Jason entered the room, he commanded attention. He let us know that it wasn’t guaranteed that we all would graduate from the program. He also gave a pretty intense opening speech about how life is not a zero sum game and that there would be no participation trophies. I have been through Air Force Basic Training and this was a very similar feeling. Jason quickly introduced the five angel investors who would be judging the companies, and come to find out, they were all top caliber. In attendance was:

These are top tier angel investors. If you have not heard of them already, look them up. As a country kid from Norris, Tennessee, my nerves began to set in. I was pretty far out of my element. I practiced my three minute pitch hundreds of times that week already, but I wish I had done more. Jason asked if anyone wanted to go first, so I raised my hand immediately figuring if it goes well we look good, and if not, at least everyone would forget about it by the time the rest of the companies presented. I watched the video recently of our first pitch, and you could hear my voice shaking because of the nerves. Which brings me to another point, Jason’s team records every pitch and requires that you watch your pitch and improve week after week. After this first pitch, I learned that Jason prefers that the judges ask all of their questions at once, and then you respond to all of their questions at one time. This is surprisingly challenging, and it takes a couple rounds to get used to.

In the end, I am glad that I went first because if I had seen how competitive it was going to be with the other companies, I would have been even more nervous. After all of the companies present, the judges pick their top three. Each judge awards companies points based on likeliness they would invest; 3rd place receives half a point, 2nd place receives 1 point, and 1st place receives 2 points. These points add up over the next 11 weeks ranking each company on their business and their founder’s ability to pitch. The points make it quite competitive. Every founder is constantly tweaking their pitch and learning how to make it better. At the end of the program, everyone had a great 3 minute pitch and presented that pitch to well over 80 investors. If we include the members of Jason’s Syndicate that live streamed the pitches and the larger events such as the Angel Summit and Launch Scale, we presented to at well over 200 accredited investors.

After the pitches, most sessions included a presenter to dive deep on a helpful topic such as user acquisition and the double-viral loop or what you need to raise a Series A. If they did not have a presenter after the pitch, it was because there was a jam session scheduled for the day after with other top founders in Silicon Valley who help you and your business. Overall, this was an invaluable learning experience for us and Kush Marketplace. We have significantly improved our network and support to continue growing as a major player in the cannabis industry!

We do not publicly talk about fundraising or corporate financing for legal reasons, but I can say that I know quite a few people who have had major success working with Jason Calacanis and his team over at Launch. It was a pleasure to work with them, and we are proud to have made it through their program! If you are in Jason’s Goldilocks zone and you are interested in the program as a founder, feel free to email me. I am an open book and happy to help make a connection!