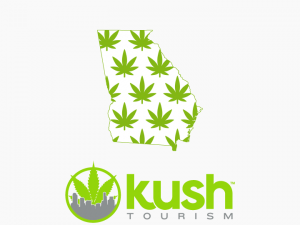 Georgia is another southern state where marijuana legalization is beginning to make progress ­- at least for now. Possessing just an ounce of weed or less is considered a misdemeanor and puts you at risk of 12 months imprisonment with a fine up to $1,000 – though as of January 2018, the city of Atlanta has decriminalized possession and now has a max fine of $75. If you’re caught with more than one ounce of weed, you’re looking at a felony with a 10­ year maximum incarceration and $5,000 maximum fine. It’s no surprise that possession with the intent to sell, cultivate, or distribute is considered a felony and carries very hefty prison sentences varying from one year to 40 years, depending on the amount of marijuana and whether you were found within 1,000 feet of a school, park, or drug-­free zone. Furthermore, these rigorous laws aren’t evenly enforced, either. According to the American Civil Liberties Union, blacks are 3.7 times more likely to be arrested for marijuana possession than whites, even though they use weed at nearly identical rates in Georgia. Sadly, this is a microcosm of the inequity found by social scientists regarding arrest rates for simple marijuana possession nationwide. If you find yourself in a pinch with the law, check out our Georgia Cannabis Lawyers page for help!

While there has been some headway with medical marijuana in the past couple years, the production and sale of [medical] marijuana is still illegal in Georgia. Fortunately, qualified patients will receive some protection from prosecution. Individuals with serious conditions such as Multiple Sclerosis and Crohn’s Disease, for example, will not be criminalized for possessing medical marijuana oil. Ironically, Georgia law does not include a provision that instructs qualified patients on how they should actually obtain medical marijuana. Medical marijuana patients can only qualify for exemption from prosecution by meeting certain conditions set forth by the state. As a result, many seriously ill individuals in Georgia are forced to violate the law, thanks to the governor’s disapproval of the regulatory system and failure to support HB 722. This “run­around” treatment by Georgia lawmakers has left many patients disappointed and disgusted. The in-­state production and sale of cannabis oil in Georgia is still part of the conversation, however, and state lawmakers are attempting to make the program more feasible.

UPDATE: As of February 1, 2018, there is a new bill, Senate Bill 614 that would legalize cannabis for adults 21+ in the state of Georgia, and it would regulate the proceeds from sales. Senators like Curt Thompson are starting to see the huge financial benefits the state has long chosen to forego. Hopefully this will mean good things in the near future. Check back here for more information as it becomes readily available!

Is Marijuana legal in Georgia?

No, marijuana is currently illegal in Georgia. Possessing even an ounce of marijuana (except for very limited allowable medical purposes) is considered a misdemeanor and can result in up to one year in jail and/or $1,000 maximum fine (Unless you’re in Atlanta.) Medical marijuana is also illegal in Georgia, but qualified patients with certain illnesses are exempt from prosecution as long as they meet certain conditions.

Legalized medical or recreational marijuana is not currently for sale in Georgia.

Can I get my Medical Card if I’m not a Georgia resident?

Georgia currently does not issue a medical card, nor does the state law indicate where qualified patients can purchase medical marijuana from.

If you are a patient suffering from qualifying conditions including cancer, ALS, seizures, multiple sclerosis, sickle cell disease, Crohn’s disease, Parkinson’s disease, mitochondrial disease, then you qualify for medical marijuana oil in Georgia. The physician treating your condition has to recommend the oil. Visit the Georgia Cannabis website [https://www.georgiacannabis.org/find­low­thc­medical­cannabis­oil/] for information on how t obtain medical cannabis oil.

Qualified Georgia patients can only legally purchase medical marijuana oil in states where it’s legal. The purchase of medical and recreational marijuana is illegal in Georgia.

Where can I go on vacation to enjoy legal weed now?

So far, recreational and medical marijuana are still illegal in Georgia. If marijuana becomes legal in Georgia, state and local authorities should have no issue with you as long as you follow the state rules. If you find yourself in a pinch with the law, check out our Georgia Cannabis Lawyers page for help!

Unfortunately, the legalization of recreational marijuana was not put on the November 8, 2016 ballot this year. However, you can still make a difference in Georgia! Advocate for marijuana law reform by campaigning with the Georgia Care Project, which educates the public, media, and lawmakers about marijuana. Also, get involved with the Marijuana Policy Project to take action on this issue. Of course, if the legalization of medical or recreational marijuana ever gets on the ballot, make sure to vote!