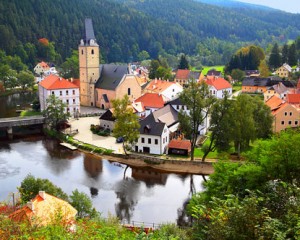 Since the Czech Republic’s forming in 1993, it has had some of the world’s most liberal cannabis laws. The founding drug laws in the Czech Republic legalized possession and use of marijuana, while the production and sale of the drug was criminalized and punishable by law. In 1999, in accordance with the UN Single Convention on Narcotic Drugs, the law was changed to criminalize possession of “amounts larger than small” of marijuana. The vague wording of the law left the legality of cannabis possession in a gray area, and the law was finally amended in 2010. The amended law established a possession limit of up to 15 grams of dried cannabis or up to five marijuana plants.

Because of the historically lenient drug laws, there is a prevalent cannabis culture in the Czech Republic. In urban centers like Prague, it’s generally easy for individuals to find people at bars, clubs, or concerts that will discreetly sell small amount of marijuana. Walking around the city, it is not uncommon to see shops selling marijuana-themed products. It is not recommended to purchase any marijuana from street dealers – they are more likely to rip you off. As long as individuals are discreet in their purchasing and consumption is limited to a private place, there is not a big cause for concern about arrest. However, always be diligent and aware of your surroundings. We do not encourage breaking the law.

Is Marijuana legal in the Czech Republic?

While marijuana is not legal, lenient drug possession laws allow citizens to possess up to 15 grams of marijuana or up to five marijuana plants.

Medical marijuana was legalized in 2013 and it is available to purchase in pharmacies, but it is often difficult to find due to production limitations.

The sale of marijuana for recreational use in Czech Republic is illegal, despite possession of small amounts being legal. Despite being illegal, the sale of small amounts of marijuana is generally tolerated, especially in more urban areas like the city of Prague. Certain bars and shops will have dealers that will sell marijuana under-the-table to inquiring customers.

It is not illegal for recreational marijuana users to possess up to 15 grams of marijuana or up to five marijuana plants. Remember that the sale of marijuana is illegal.

How can I get a medical marijuana prescription?

Medical marijuana prescriptions must be obtained via a special electronic prescription. Patients must be diagnosed with a permitted illness – AIDS and multiple sclerosis – and prescribed a cannabis prescription from a specific medical professional. Note that patients are not permitted to grow their own marijuana and marijuana will not be covered by health insurance. Prices will likely be high due to the limited production of marijuana in the Czech Republic.

Where can I consume marijuana in the Czech Republic?

Can I bring marijuana from the Czech Republic to another country?

Can I still get in trouble for possession of cannabis?