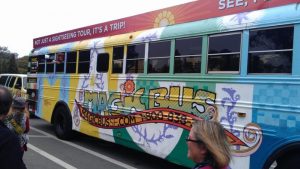 The Magic Bus Experience is a rolling theater, in an old converted school bus, filled with the music, psychedelic images, and classic footage from the summer of love. We have been taking guests on tours to Haight Ashbury for the past 8 years, and have become very popular internationally.
On April 20 of this year, we are adding a new show that we are calling “The Magic Cannabus”. We will be telling a great story about the history of marijuana over the past decades; from it’s humble origins of being used by beatniks and jazz musicians and hippies, all the while illegal, to the great efforts of “Brownie Mary” and her providing ill patients with much needed marijuana to ease their pain, all the way to this great time of the end of prohibition and the legalization of marijuana for medical and recreational use.

Only in San Francisco!

The Magic Bus is an entirely one-of-a-kind experience. You may ride many tour buses in your life, but not one that transforms into a traveling movie theater, light show and rocket ship while showing you the San Francisco of yesterday and today.

In the morning, roll on the tantalizing Magic Bus tour and then visit the Rock, Alcatraz Island, that same afternoon — the best “only in San Francisco day!” You’ll experience the world-changing psychedelic 60s and then hear from the former inmates and guards who lived on Alcatraz.

Magic Bus is created, and produced by the Bay Area’s, award-winning Antenna Theater. Chris Hardman, founder of Antenna, is known for his original theatrical experiments including the world-renowned, Alcatraz Cell House audio tour. It’s been enjoyed by millions. 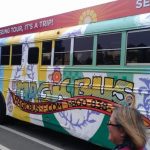 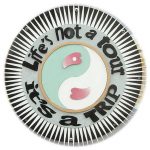 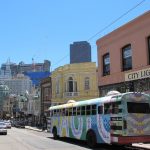 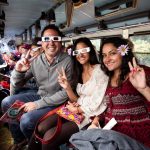 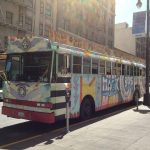