Autumn is an excellent time to visit grow facilities, learn about industry innovations and check out the cannabis trade in the state of Washington. Fire up the bong cause October is Croptober and celebrations last through Nug-vember. 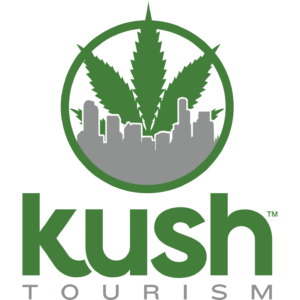 Cannabis prices are currently rock bottom and last season’s outdoor bud is at the zenith of its curing process as consumers wait anxiously for new crops to come in. Preheat that dab rig cause Christmas comes a full season early for cannasseurs. Just imagine a whole month of Black Fridays and that’s what it’s like to be in Seattle during this time of year. Retailers are making way for the new baby buds from outdoor grows, and everyone is basking in the limelight.

Peak tourism season for the Pacific Northwest is generally in the sunny summer months but when the rains come in, everything gets a whole lot greener in the Emerald city (wink wink nudge nudge)

And now a moment for our Cali homies…

California boasts better Autumn weather but with the tragic wildfires they got hit with this summer, they’re scrambling to salvage the acreage they have left – making the Pacific Northwest the ideal destination for cannabis tourism by default. As we work toward normalizing cannabis on the whole, the devastation California is experiencing can be prohibitive of overall legitimacy. 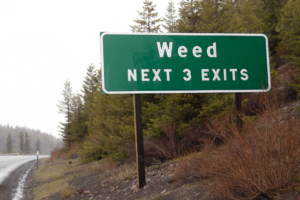 Tens of thousands of growers reside in Northern California and because of federal restrictions and the cash only nature of the business, many remain uninsured. This means many hard working legitimate farms will have to shut their doors which potentially leaves a clearing for the black market to thrive. Of the thousands of farmers in the state, only a small handful have joined the system to participate in the regulated market. Logically it follows that if the legitimate farmers were hit hard by the fires then so too were the black market farmers.

While it’s true, the devastation experienced by outdoor farms in the region were affected pretty equally; the indoor grows throughout the state have a different tale to tell. An estimated 13.5 million pounds of pot was produced in California last year while only 2.5 million pounds was consumed legally within the state making California one of the nation’s leaders in black market cannabis. The fact that the market value is significantly higher on the east coast than it is in California de-incentivizes farmers to join the regulated system.

How Does This Impact the Rest of the Community?

California isn’t the only state for which this is a problem it’s just among the ones with the highest profile. This is why the cannabis industry is still considered a maverick with regard to the legality of their business practices outside of recreationally legal states. Add to that the push back from local authorities to growers who are already adhering to strict regulations and it becomes clear that the cannabis industry was well under fire before mother nature weighed in on the situation. 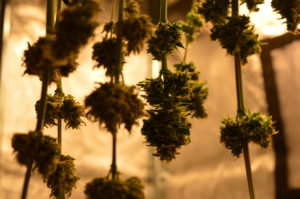 According to Chiah Rodriques, Founder and Operations Director of Mendocino Generations and Arcanna Flowers, a grow collective that includes 40 cannabis farms in Mendocino, the damage for many farmers is irreparable. In her collective alone one farmer lost their home entirely to the fire, 15 had to be evacuated and 2 returned to find their crops which had been in the curing process prior to the fire riddled with mold rendering the entire crop unsalable. Rodriques’ account of what is happening on her collective is a small cross section of thousands of hectares lost throughout the region.

Those lucky farms who survived the fire in the collective are now concerned about smoke damage and are working with testing companies like CW Analytical to test products for pathogens and toxins caused by the smoke. All this devastation on the eve of Proposition 64 which opens California up to recreational cannabis in January of 2018 and the fight toward legitimacy feels like an uphill battle. Like it or not, in order to gain the right to recreational cannabis nationwide, each state must adhere to a set of standards prescribed by the collective constituency. To maintain the footholds already gained as an industry, visit a state with a thriving recreational industry and keep money off the black market while our friends in California rebuild.

To help cannabis farmers in the region please consider contributing to the following: