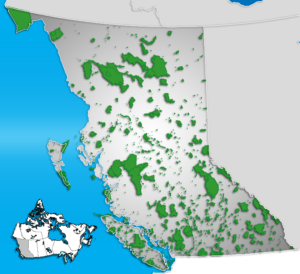 British Columbia has a massive network of parks!

British Colombia is very marijuana friendly – perhaps because of its proximity to the green state of Washington. Vancouver has been a trailblazer in creating new marijuana regulations regarding the illegal medical marijuana dispensaries operating around the country and in February 2016, a federal judge in British Colombia ruled that medical marijuana patients have the constitutional right to grow their own marijuana.

One unique feature of Canada’s medical marijuana program is that patients must receive their medicine by courier. There are no legally operating retail storefronts for patients to pick out their marijuana strains; instead, marijuana ordering is done online. Strain recommendations must come from a patient’s healthcare provider or someone online who can help recommend a good choice.

It remains illegal to consume marijuana in public in British Colombia, but a number of lounges operate under the “safe space” law and provide a place for medical marijuana users to come consume. The lounges do not sell marijuana, and only provide a place for marijuana users to congregate and consume together. The presence of these lounges has given Vancouver the nickname “Vansterdam” – you don’t need a medical prescription to get it, so tourists are welcome. Just bring your own marijuana! When choosing to consume, always use your common sense and discretion.

Is Marijuana legal in British Colombia?

Yes, for both recreational and medical purposes. Medical marijuana is legal in all of Canada with a qualifying medical condition and prescription from a licensed doctor. As of October 17th, 2018 Recreational Cannabis is now legal and shops are opening their doors!

In Vancouver specifically, there are a few dispensaries that have been licensed by the city and are now licensed operators. It is expected the number of licensed dispensaries will only continue to grow as dispensaries adapt to the city’s conditions for approval.

If you are an adult over the age of 19, get out there to a rec dispensary and make a legal recreational cannabis purchase and breathe a deep sigh of relief!

On the medical side, the Marihuana for Medical Purposes Regulations specifies that licensed producers will only be permitted to sell dried marijuana and oils for taking orally. There will be a number of different strains to choose from, ranging from strong Indicas to strong Sativas and everything in between. Each strain can have different effects, so be sure to ask your physician for assistance in choosing the best marijuana strain to help treat your condition. Sativas strains are known for giving a stronger head high, with generally uplifting and energizing effects. Indica strains are known for their full body highs and sedative, tiring effects – Indica strains are more likely to give you couch-lock.

Recreational stores will have a wide variety of products from dried flower, to concentrates, as well as edibles. Go find the right product for you!

This is dependent on the marijuana providers, which product you will be purchasing, as well as potency and quality, but patients and recreational consumers can expect prices to be between $8-$16 per gram.

In public, adults may possess up to 30 grams of usable marijuana, but there is no limits to the amount you may have at home. Additionally, all adults may cultivate up to 4 cannabis plants at home. What a world!

Marijuana consumption is forbidden in public, so patients must restrict consumption to the home or private property. British Colombia also has a “safe space” law that allows lounges to operate. These lounges do not sell marijuana, but they provide a space for marijuana users to congregate and consume together. These lounges typically have vaporizers, bongs, and other smoking devices available for rent, as well as munchies for sale. The lounges are operating legally, as long as they are not selling marijuana.