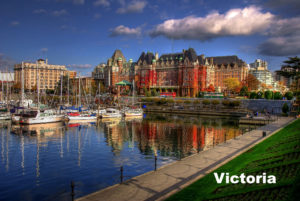 Sitting on the southern tip of Vancouver Island, the city of Victoria is the capital of British Columbia, and has a population of about 80,017. The city was officially incorporated in 1862, but settlement began in 1843, making it one of the oldest cities in the Pacific Northwest. Located about 60 miles from Vancouver, and also 60 miles from Seattle, it is a popular destination for getting away. Tourism plays a big part in the city’s economy, and its ideal location is a huge contributing factor to their success in that realm.

The city was named after Queen Victoria, but is also known by their nickname “The Garden City.” The city gained themselves this honor by maintaining many lush and beautiful gardens, parks, and other green areas around the city that make perfect respites from the busy 9-5 grind. Victoria is a great city to go out for an aimless stroll in because you never know which park featuring what beautiful flowers you will find yourself in.

THe city also has many institutions of higher education, so there are always lots of young minds soaking up new information like sponges. We love cities that are young and vibrant like Victoria! The University of Victoria, Royal Roads University, The Victoria College of Art, and Camosun College are all located in town.

With such a young city that is ideally located on the coast, there is a huge boating and aquatic scene to get involved with in the area. With everything from swimming, to sailing, kayaking, and fishing, if you love being on the water, Victoria might just be the best spot for you!

There are no retail medical marijuana shops in Canada, instead they utilize a system where meds are distributed through the mail or by personal delivery. That being said, we haven’t yet started a Victoria dispensary map & directory, but when recreational shops do start opening, we will definitely create one, so keep your eyes peeled for more once the legalization does occur.

Come check out Victoria as soon as you possibly can! It is an easy place to lose yourself in, because it is such a cool and beautiful city. If you would like more information on British Columbia Marijuana Laws, click here!