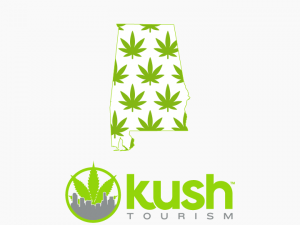 Alabama is one state where you don’t want to get caught with marijuana. Possessing any amount ­even just an ounce or less­ of weed for personal use is typically penalized with a misdemeanor with up to one year in prison or $6,000 fine. If you’re suspected of possessing marijuana for any purpose other than personal use, you could be facing a felony with up to 10 years in prison or $15,000 maximum fine. Selling, trafficking, and cultivating marijuana (except industrial hemp) are all considered felonies and carry very hefty penalties. If you do find yourself in a pinch, check out our Alabama Cannabis Lawyers page for help!

Unlike the dozens of states that have legalized medical marijuana, Alabama does not seem to be budging on the legalization of recreational marijuana in any way. Recently (2/21/18) a bill was rejected by the Alabama Legislature that would have reduced possession penalties. The bill aimed to reduce the penalty for possession of one ounce or less from a misdemeanor to a violation that would come with a $250 penalty for both the first and second offense. Upon the third and any subsequent offenses the penalty would be raised to $500, but it would still be considered a violation. The Alabama legislation thought this bill went too far for suggesting that even after multiple offenses that it would still be considered a violation, and thusly rejected the bill with a 7-5 vote. Hopefully Alabama will change their views soon!

However, cannabidiol or CBD has been legal in Alabama since 2014, when the first cannabidiol (CBD) oil medical study began at the University of Alabama. CBD only contains the compound in cannabis that has medical effects. THC (the part of cannabis that can get you high) was prohibited from CBD until Leni’s Law went into effect June of 2016, after proponents suggested that THC can help alleviate severe seizures and other conditions. Leni’s Law allows cannabidiol to contain up to 3% of THC.

The policy HB 393, which was enacted in 2016, permits the cultivation for hemp for industrial purposes in Alabama, allowing for the creation of hemp cloth, paper, fuel, and other commodities. It does not consider industrial hemp as a controlled substance. This is another forward step for Alabama.

Although the legalization of recreational marijuana in Alabama seems like a long, slow journey ahead, the idea of cannabis for medical and industrial use is becoming more accepted as its many benefits are become more evident and mainstream.

Is Marijuana legal in Alabama?

No, marijuana is illegal in Alabama and consumption is punishable by harsh penalties. Only cannabidiol (CBD) oil is available for patients who suffer from specific conditions that are resistant to conventional medicine. Alabama’s medical marijuana program is still pending and has not been officially enacted.

Legalized marijuana is not currently for sale in Alabama.

Can I get my Medical Card if I’m not an Alabama resident?

There is no access to a legal medical marijuana card in Alabama at this time. However, the law does not state that patients must be Alabama residents to obtain CBD oil for medical purposes.

There is no official medical marijuana program enacted in Alabama yet. The only legal way to obtain access to CBD oil is by acquiring a prescription by a board­certified neurologist through the authority of the UAB Department. This basically means that you have to be enrolled in an FBA­ approved clinical trial.

You cannot legally purchase any form of marijuana in Alabama.

Neither medical nor recreational marijuana is legal in Alabama yet, so you could definitely get in trouble if caught with any form of weed. If you do find yourself in a pinch, check out our Alabama Cannabis Lawyers page for help!

You can make a difference by voting in support of marijuana legalization in Alabama. Plus, you can join The Alabama Medical Marijuana Coalition, an organization that fights for all Alabama patients’ rights to medical marijuana through community involvement, education, and aggressive legislation.